Mooji tells the following story of a great Yogini (a female Yogi).

A great Yogini was deep in meditation. Suddenly, beautiful and melodious sounds could be heard, appearing as if from nowhere and everywhere simultaneously. It was like nothing she had ever heard. She felt, ‘This music is truly wonderful but it cannot be what I am for I am here to hear it.’ The music faded away. Next appeared the most exquisite colours, like no painter could paint; nor could any flower display it, for it was not of this earthly realm. She thought, ‘This is indeed astonishingly beautiful. However, it cannot be who I am nor can it be real for it cannot appear if I were not here to perceive it.’ This phenomenon, too, she ignored. Shortly afterwards, it also vanished in the presence of her deep and unmoving silence. Shortly after this, there appeared several beings shaped as if from pure light, floating through space and smiling lovingly at her in a welcoming manner. She felt profoundly touched and filled with loving emotions but inwardly, she somehow, kept her composure. ‘How profound,’ she felt, ‘but this also cannot be What Is the unchanging reality, for were I not here, who would see them?’ As soon as this insight occurred, the figures vanished. Her mind entered her heart and could no more produce any effects. A deep silence prevailed as her mind merged inside her indivisible, unconquerable and essential being – a state known to the Yogis as Nirvikalpa Samadhi. 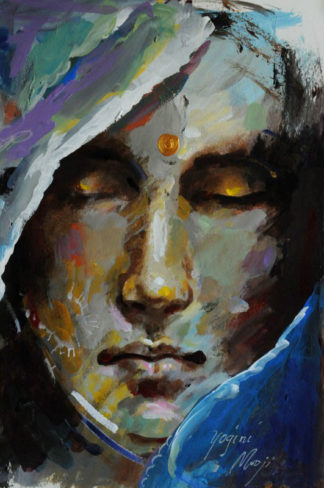 You're viewing: The Yogini €10
Add to cart