“All praises to the Supreme!
So much love, so much peace, so much joy!
The Lord is the life inside your Heart!
What good fortune, what more is needed?
Bam Bhole!”

Featuring spoken word by Moojibaba on many tracks.

Most of these Bhajans were recorded spontaneously during the very early days of Monte Sahaja, in front of an open fireplace and under the beautiful expanse of the night sky – before the ruins even had a roof. These bhajans were often preceded or followed by spontaneous Satsang with Moojibaba who was usually sitting with us, singing and sometimes drumming along to the songs. The unique vibration of sweetness and freshness – and an unexplainable silence – of those early days is very palpable in these recordings.
The rawness of the bhajans themselves is echoed in the sound quality – most songs were recorded spontaneously on a Zoom recording device. For this reason, the sound quality may be lower than the other Mooji Mala albums. 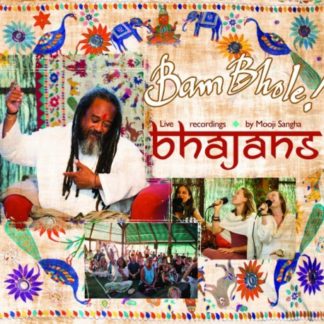