Free ShippingEurope over €75 | Worldwide over €125
View cart “Wake Up and Roar, Vol. 1. Satsang with Papaji” has been added to your cart.

Sri H.W.L Poonja (Papaji) attracted thousands of seekers to his Satsangs in India. Among them were scholars, journalists and writers. This book chronicles some of the most powerful and insightful interviews they had with him at his home between 1990 and 1993. Included is a biography of Papaji, focusing on his early life and relationship with his beloved Master, Baghavan Sri Ramana Maharshi.

Sri Poonjaji (Papaji) was born on October 13, 1910. He had his first direct experience of the Self at the age of eight. In 1944, he met his Guru, Baghavan Sri Ramana Maharshi. Shortly afterwards, in the presence of his Master, he came to a complete realisation of the Self.

Papaji continued to work and support his family up until his retirement in 1966. After this time, he lived on the banks of the Ganges and travelled the world before settling in Lucknow, India where he spent his final years welcoming all who came, and giving daily Satsangs to the many devotees who came to listen to him. It is from this time at Lucknow that these interviews were given.

Papaji: Interviews chronicles the encounters of well-known writers such as Jeff Greenwald, Catherine Ingram, Wes Nisker, and David Godman with Papaji on a wide variety of topics. It also contains a first-person account of Papaji’s life and realisation.. 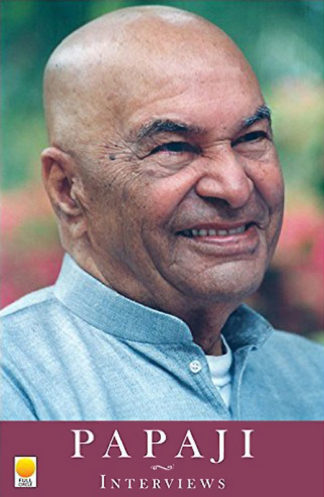