I Am My Own Home

In this powerfully direct guidance for those who are maturing in Mooji’s pointings, he encourages and challenges to see, Who or what is truly here? This discovery is not a prophecy for some future; now is the time to transcend the one who carries the seed of apartness.

“Do not lock yourself out of your own house by forgetting who you are.
All is here for you, so do not die of thirst by the side of the river.
Realise inside your heart: ‘I am the eternal one,’ and be timelessly happy.”
~ Mooji

Silent sittings began as a way for Mooji to sit in early morning contemplation with the sangha in Monte Sahaja. Mooji’s guidance in these sittings is deep and profound — they arise from the silence of the Self and carry this vibration. They have the power to merge the restless mind into stillness and presence.

“Beyond thought, beyond birth,
Beyond death, beyond growth,
Beyond worthy or unworthy.
Beyond good, beyond bad.
Beyond Hell, beyond Heaven.

Beyond awakening.
Who is here?
I am my abode.
You are your abode, your home.
This is not a prophecy for some future.
It is the key to the Source
which is without the sense of apartness. 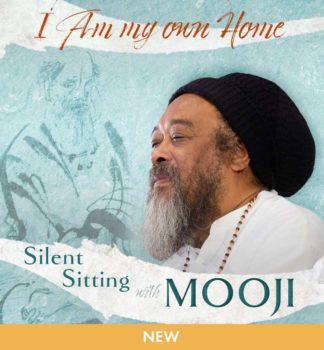